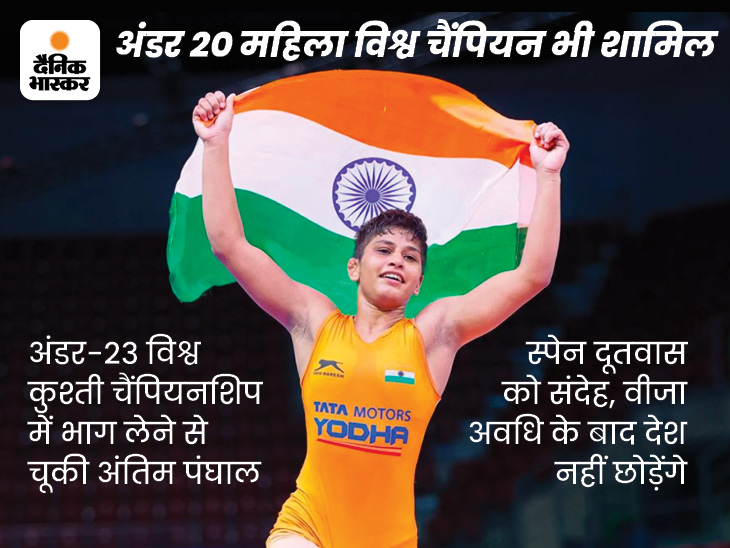 The Spanish Embassy has dealt a big blow at the Under-23 World Wrestling Championships. Haryana CM Manohar Lal has expressed displeasure over the denial of visa to the 21-member team of Pahlwans. He has said that he will take up the issue with the Ministry of External Affairs. Along with this, the state government has also assured to provide all possible help.

30 players in the squad for the championship
A 30-member Indian team is about to leave for the Under-23 World Wrestling Championship. In this, the Spanish Embassy has refused visas to 21 members. Most of the wrestlers in these members are from Haryana. This has dealt a big blow to the players of Haryana.

Wrestling Federation of India also expressed surprise
Brij Bhushan Sharan Singh, president of the Wrestling Federation of India (WFI), has expressed surprise over this. He said that this is the first time this has happened. They have stated that when a tournament is assigned to a country, there is a condition that they will not prevent players from any country, even players from countries with which they have strained relations.

hence the visa rejected
The visa application was rejected only because the Spanish embassy suspected that the players would not leave the country until the visa period expired. This is the first time that only nine players from the country were given visas. Indian wrestlers who missed out on the championship include U-20 women’s world champion Last Panghal.

‘Who Started It?’: Putin Says Strikes on Ukraine’s Power Grids Likely to Continue

Intermittent Fasting For Weight Loss: 5 Myths You Should Stop Believing