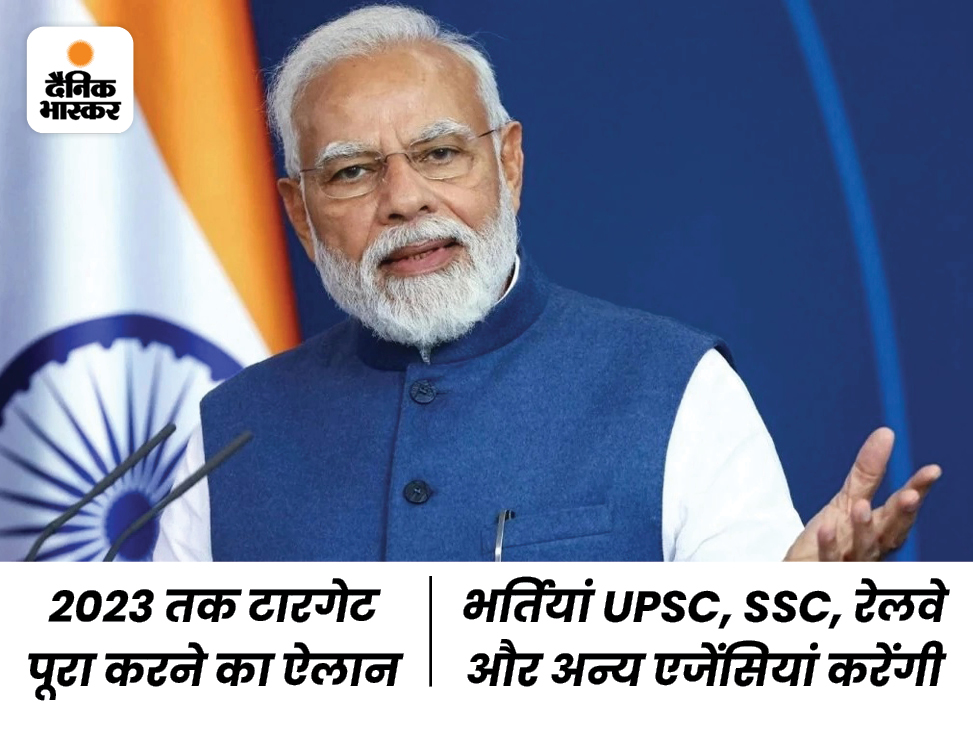 Prime Minister Narendra Modi will give jobs to 10 lakh youth in the next one and a half year i.e. by December 2023. He will launch this mega recruitment drive from the day of Dhanteras i.e. 22nd October before Diwali. On this day 75000 people will be given appointment letters. During this, the PM will also interact virtually with these youth. This information has been given by the Prime Minister’s Office (PMO) itself.

According to the PMO, Prime Minister Narendra Modi had reviewed manpower in 38 ministries/departments in June this year. After which he had announced that his government would provide 10 lakh jobs in the next one and a half year i.e. by 2023 December. All these recruitments are being done through UPSC, SSC, Railway Recruitment Board and other central agencies.

Recruitment will be done on these posts
Under this mega job campaign of PM, Ministry of Defence, Ministry of Railways, Department of Posts, Ministry of Home Affairs, Ministry of Labor and Employment, Central Industrial Security Force (CISF), Central Bureau of Investigation (CBI), Customs and Banking, Armed Forces personnel, all Jobs will be given to the selected youth from across the country in 38 departments including Inspector, Constable, LDC, Steno, PA and Income Tax Inspector.

As of 2020, 8.72 lakh posts were lying vacant.
Last year, Union Minister Jitendra Singh had told the Parliament that 8.72 lakh posts were lying vacant in the central government departments till March 1, 2020. There are a total of 40 lakh 4 thousand posts in the central government departments, out of which 31 lakh 32 thousand were filled. A total of 2 lakh 14 thousand 601 employees were recruited in SSC during 2016-17 to 2020-21. Also, RRB has appointed 2 lakh 4 thousand 945 people. At the same time, UPSC also selected 25 thousand 267 candidates.

Modi had said – it is necessary to teach a lesson to those who abuse Gujaratis, said in Junagadh – some people do not like the success of Gujarat

Prime Minister Narendra Modi had said at a rally in Junagadh, Gujarat on Wednesday that some people do not like the success of Gujaratis. Teach such people a lesson. Stay away from negative people who lie. PM Modi had said that if a person from any part of the country achieves any achievement, then you will be proud or not?

Will you be happy or not if scientists from South India succeed in ISRO? Would you be happy if a youth from Haryana wins a gold medal in the Olympics? But from last two decades we are seeing that there are some people with bad mentality who do not like the success of Gujarat or any Gujarati. They insult Gujarat and slander Gujaratis. Read full news…