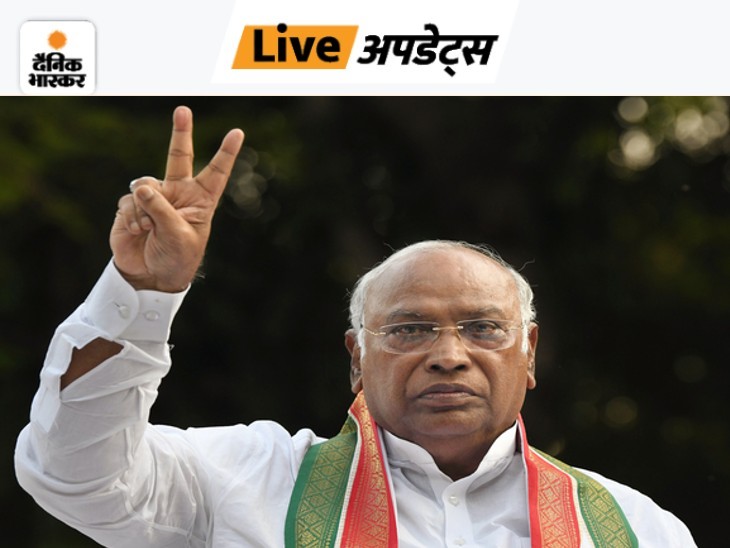 Mallikarjun Kharge, elected Congress President, has changed his Twitter bio. Now it is written ‘President: Indian National Congress’. Kharge has won the election of Congress party president on Wednesday itself. Kharge will take over on October 26.

Congress leader and former Home Minister Shivraj Patil has compared the teachings of the Gita with the Gita. Patil said that jihad is not only in the Quran, but there is jihad in the Gita as well, there is jihad in Jesus as well. Patil has given a controversial statement at a book launch program in Delhi on Thursday.

Shivraj Patil comes from Maharashtra. He has been a Member of Parliament from Latur. The seat is occupied by the BJP since 2014.

Girl dies after seven days of self-immolation in Jamshedpur

Jamshedpur The student, who committed suicide after getting her clothes stripped and examined on the charge of copying, died on Thursday. The victim, who fought for life for seven days, was admitted to TMH. After the news of the death of the student, the district administration has deployed troops for the security of TMH.

Let us tell you that in Shardamani Girls High School, the teacher had examined the girl student by taking off her clothes in front of everyone on charges of cheating. After this incident, the girl became so upset and embarrassed that she had set herself on fire after reaching home. Read full news…

In Amritsar, Punjab, Delhi Police and local police have arrested 3 associates of Lakhbir Singh Landa, a terrorist sitting in Canada, after conducting a joint operation. All three were preparing to carry out the big crime. The police have also recovered a large quantity of weapons from the three. Three pistols have been recovered from them. Not only this, an AK47 has also been recovered. Read full news…

Mumbai’s special PMLA (Prevention of Money Laundering Act) court has allowed ED to attach 39 properties of fugitive diamond merchant Nirav Modi. The court has also accepted the plea of ​​PNB in ​​which the bank had sought mortgage of nine properties of Nirav Modi and his company. Let us inform that Nirav Modi was declared a fugitive by the Special PMLA Court in December 2019 under the Fugitive Economic Offenders Act, 2018.

Ethnic clashes following a land dispute in Sudan have killed 150 people in two days of fighting. 86 people have been injured in the violence. According to media reports, women, children and elderly are among the dead.

There was a dispute over land between the Hausa community and members of the Wad al-Mahi faction. As the fight escalated, shots were fired from both sides and houses were set on fire.

Maharashtra government will withdraw all criminal cases related to agitation on political and social issues. In the cabinet meeting on Thursday, the state government has decided to withdraw all such cases till June 30, 2022. These shall be such cases in which there is no loss of life or public property of any kind.

Shrikant Tyagi released from jail; Was arrested after misbehaving with woman

On October 17, the High Court had granted bail to Mr. Kant Tyagi in the gangster case. He was released from Luxor Jail on Thursday evening after the paperwork was completed. After his release from jail, he is going to meet his family directly. During this, he said that he has faith in the judiciary. The society supported him, he always stood with the society. He is reaching the Grand Omaxe Society near the family.
10 kg pipe bomb recovered in Chhattisgarh’s Kanker

Security forces have recovered 10 kg pipe bomb in Kanker district of Chhattisgarh. The bomb has been destroyed. Police officials gave this information on Thursday.

Police said that during the patrol, the police got information that the Maoists had made a landmine in the forest of Tekapar village in the district. This tunnel was meant to harm the security forces. After being informed, the security forces recovered a pipe bomb containing a 10 kg bomb from the spot.

The special court of CBI heard the bail plea of ​​former Maharashtra Home Minister on Thursday. Court has reserved order on Deshmukh’s bail plea. The court will deliver its verdict on Friday at 3 pm.

Congress General Secretary Priyanka Gandhi Vadra will hold 8 rallies and road shows here due to the assembly elections in Himachal Pradesh. Priyanka had started election rallies in the state on October 14. Elections in the state are to be held on November 12 and the results will be out on December 8.

Four people died in a blast in an illegal firecracker godown in Morena. The explosion was so strong that the building in which the firecrackers were being made completely collapsed. Many people making firecrackers were buried under the rubble. The condition of 4 is said to be critical. The accident happened in Jaitpur village near Banmore town.

The injured have been admitted to Morena Hospital. When the time blast occurred in the building, the construction work was going on at that time. The whole house was engulfed in the sudden explosion and about 7 people were burnt. On information, SDOP and TI Viresh Kushwaha have gone to the spot with the team. Read full news here…

Maharashtra ATS on Thursday arrested four people associated with the banned organization PFI. The arrest was made after receiving information about their meeting in Panvel. The accused has been booked under UAPA in a case registered at Kalachowki police station in Mumbai. All the arrested accused are being interrogated in the case.

BJP’s list of 6 tickets for Himachal Assembly released; Ticket to Dehra to Dhawala and Jwalamukhi to Ravindra Ravi

The Bharatiya Janata Party on Thursday afternoon announced its candidates for the remaining 6 seats in the Himachal Assembly. BJP has fielded former minister Ravindra Ravi as its candidate from Jwalamukhi seat. However, he was a contender for ticket from Dehra seat. Similarly, Jwalamukhi’s sitting MLA Ramesh Dhawala has been made a candidate from Dehra. The swap of the assembly constituencies of these two was done on the instructions of the party high command. Read full news…

2 killed, 10 injured as tipper truck capsizes in Ladakh; Rajnath Singh expressed grief
A tipper truck of the General Reserve Engineer Force (GREF) overturned in the Sasoma-Saser La area of ​​Ladakh late on Wednesday night. Two people died in the accident, 10 were injured. According to the Defense Ministry, the incident happened when road construction work was going on in the area. Defense minister Rajnath Singh has expressed grief over the accident.

A huge fire broke out in the huge dome of the Jakarta Islamic Center Grand Mosque in Indonesia. Then the dome collapsed. According to a Gulf Today report, there were no casualties in the accident. Renovation work was going on in the dome. At that time the fire broke out. At least ten fire tenders were dispatched to douse the fire.

Earthquake tremors in Gujarat’s Surat, measured 3.5 on the Richter scale

Mumbai Police has seized mephedrone during raids at two places on Wednesday. Its price in the international market has been estimated at Rs 60 lakh. 3 accused have been arrested in the case. The team of Anti Narcotics Cell of Mumbai Crime Branch carried out the raid.

In Kolkata, the ED has raided the office and house of businessman Umesh Agarwal in connection with a money laundering case related to a gaming app. According to news agency ANI, the raid is still going on.

A policeman’s service revolver suddenly opened fire in a shop in front of Amritsar railway station. The shopkeeper was seriously injured in this accident, who was rushed to the nearest hospital. The incident happened on Wednesday afternoon.

According to the information, ASI Harbhajan Singh of Punjab Police had gone to a shop to get his defective mobile repaired. There he suddenly opened fire. The injured shopkeeper has been identified as Nitin Kumar. Read full news…

Britain’s Interior Minister Suella Braverman of Indian origin resigned from the cabinet on Wednesday. A few days ago, Finance Minister Kwasi also resigned. The news of Suella’s resignation has been given in local media reports. So far, Prime Minister Liz Truss or a government spokesperson has not said anything about it. Liz Truss, the leader of Britain’s ruling Conservative Party, has had a very bad week so far. Some MPs from his own party are also demanding the resignation of Liz.

Some reports have said that Suella may soon announce that she will join the race for party leadership. Recently, he blamed immigrants for the rising crime rate and religious violence in Britain.Read full news…