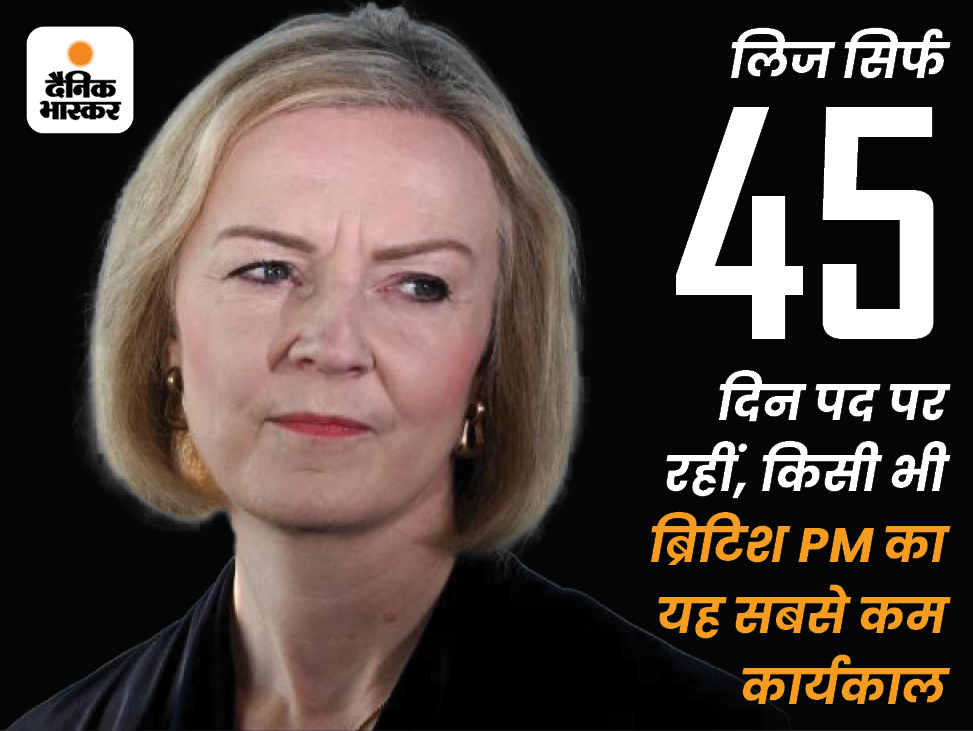 British Prime Minister Liz Truss, who has been facing heavy pressure for a week, finally announced her resignation on Thursday. However, she will remain in the post till the next Prime Minister is elected. Sir Graham Brady, chairman of the Conservative Party’s Special Rule Committee, 1922, met Liz and told her that the party no longer saw him as a leader.

According to BBC – Liz remained in office for only 45 days. This is the shortest tenure of any British Prime Minister. Before this, in 1827, George Canning was PM for 119 days.

what did liz say
The British Prime Minister told the media outside her official residence 10 Downing Street – I could not fulfill the promises I came to power. regret it. I have informed King Charles about this. Even between the party and her own turmoil, Liz remained silent last week. The situation was such that the opposition even tightened the taunt of hiding under the bench in Parliament.

Liz gave an interview to the BBC on Monday. Said- Taking responsibility for the breach of promise and mistakes, I apologize. We want to fulfill every promise, but now it will take time. On the question of resignation, had said – I do not give up. Don’t waste time on frivolous things like resignation. The same thing is in the interest of the country. However, he resigned after 2 days.

Second- If the government wants to announce the election or it should continue whatever is going on. Usually ruling parties announce elections only when they are confident of victory. That’s what Boris Johnson and Theresa May did. Liz had become very weak politically at the moment. Instead of announcing a fresh election, he resigned so that the blame for the defeat would not go to his head.

According to BBC – Liz had disappointed everyone. Hence the demand arose that this one-year rule should be abolished by convening a meeting of the 1922 committee. Sir Graham Brady, the chief of the committee, could have done this, and he did.

middle way taken
The snake also died and the stick did not break. According to the British website ‘National World’ – there is one more rule in the Conservative Party. Under this, the party can remove its leader i.e. the Prime Minister. 50% of Conservative MPs could approach Sir Graham Brady, the chief of the 1922 committee, asking for Liz’s removal as leader. That’s what was done.

Sir Brady then went to Lidge with the party’s chief whip, Wendy Mortern. Told them the wishes of the MPs. However, this was also an indirectly designed exercise. The popularity of the party has come down by 34%. Liz’s approval rating had reached minus 47. There is a general election in 2025.

Who will be the prime minister? The sage heard and was silent
Former finance ministers Kwasi Warteng and Jeremy Hunt have both declared themselves out of the race for the new party leader. Now the strongest claim can be considered to be of Indian origin Rishi Sunak. On Wednesday itself, ‘The Guardian’ had said in a report – the thinking of the people of Britain and many MPs of the Conservative Party is that Sunak was to be made prime minister in September. Liz was chosen wrong.

Now the question is, will Rishi Sunak join this race again? The main reason for this is that there was turmoil in the politics of the party and the country since 15 days and the sage was calm. Former minister Mordent can also join the race. Anyway, Sunak got the most votes in the voting done by the MPs before Liz was elected.

But, when two candidates, Liz and Sunak, were left, the members of the Conservative Party took the decision. Liz won it. Sunak was already warning that the election promises Liz was making would destroy the UK economy.

Rishi Sunak of Indian origin was the first choice of MPs of the ruling Conservatives in Britain’s prime ministerial election. In all the five rounds of voting, Sunak won every time by a huge margin. The final decision was taken by 1.60 lakh party members. His choice was Liz Truss. After the victory, if Liz’s first speech is listened to carefully, then it becomes clear that how much will Liz need the firebrand of Rishi, who is called the master of trade and economy. read full news

47-year-old Liz Truss will be the new Prime Minister of Britain. He defeated the Indian-origin sage Sunak. Right wing Liz will replace Boris Johnson. Liz is known as the firebrand leader in British politics. After the announcement of victory, Liz said about Sunak – I am lucky that there are leaders with such deep understanding in my party. Thanks to family and friends too. read full news