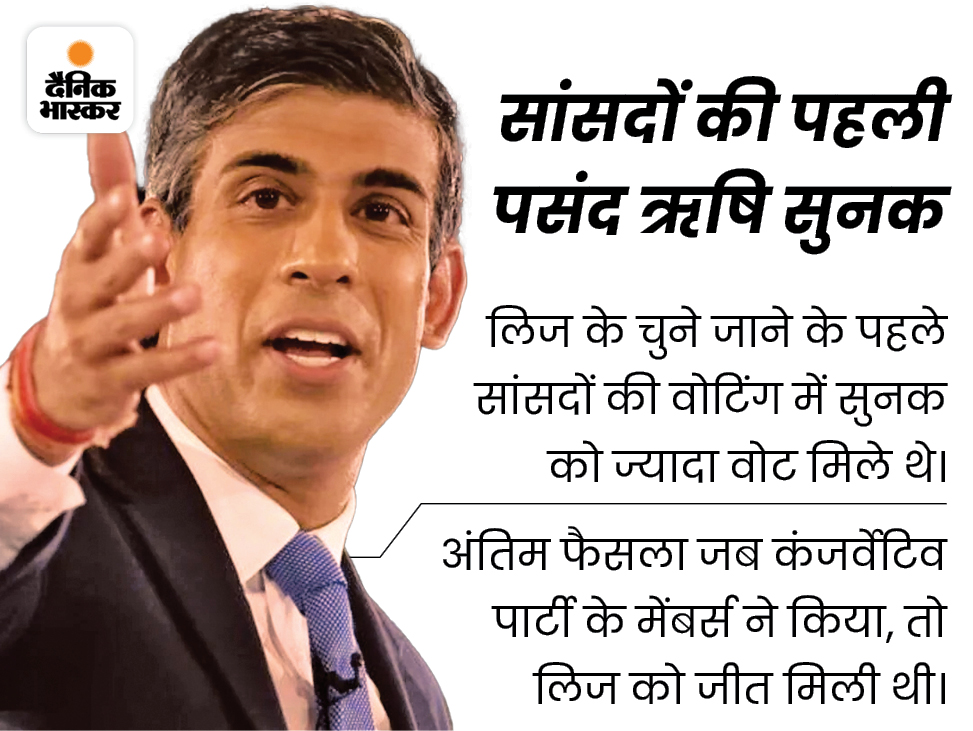 What the political pundits of Britain had been saying for many days, the same thing happened. Until just 24 hours ago, Liz Truss was refusing to resign as prime minister. Eventually he had to bow down to party pressure. Liz resigned, although she would remain in office until the next party leader was elected.

According to Conservative Party officials, the new prime minister will be elected on October 28. Now the question arises, who will become the new leader of the Parliamentary Party of the Conservative Party after Liz? In media reports, Rishi Sunak of Indian origin is being told as the biggest and most capable contender for this post. On Wednesday, several leaders reminded him of Sunak’s statement in August. Then Rishi had said – Liz is making an election promise of tax cuts, it will destroy the economy. Rishi’s words proved to be true.

Wait and watch, cut out from the party meeting
Rishi Sunak, who lost in the voting of the members of the Conservative Party in the election for the post of PM, is currently adopting the policy of wait and watch. Sunak has refused to attend the annual meeting of the Conservative Party to be held in October. Sunak has shied away from public statements. The last tweet was on 8 September.

It is believed that Sunak is engaged in a strategy with the supporters. Because, Sunak has more MPs’ support than Truss. In the final voting of MPs, Sunak got 137 votes of Conservative Party while Truss got 113 votes of MPs.

Sunak’s apprehensions, which turned out to be true
Trussonomics is like a fairy tale to cut taxes and take loans from the central bank.
Result: In the mini budget, the Truss government cut taxes, but the middle class was given a rebate of 19% while the rich were given up to 45%.
Strict measures will have to be taken to get relief from inflation. The government has to increase its foreign exchange reserves.
Result: This did not happen, the British pound reached a 50-year low against the dollar. The Central Bank has to pay the liabilities. Inflation unbridled.

What was said about India 2 months ago

How PM is elected in UK

Akshata Murthy, wife of Indian-origin British MP Rishi Sunak, is facing tax evasion charges. Akshata is the daughter of Narayan Murthy, co-founder of Infosys. Even after living in Britain, Akshata has not given up Indian citizenship. Because of this he is not a British citizen. According to British law, Akshata does not have to pay any tax on her earnings from outside the UK. read full news

Rishi Sunak had said – UK can learn a lot from India

Rishi Sunak, who is considered to be the strongest contender for the post of Prime Minister of Britain, wants to bring a positive change in relations with India. They want that students of India and UK should not face any problem in traveling to each other’s country. Apart from this, companies can also trade easily. India UK relations are important. We want to build domestic relations between the two countries. Britain needs to learn a lot from India. read full news

Almost 45 days after taking over as British Prime Minister, Liz Truss’s chair has fallen into disrepair. Meanwhile, the claim of Indian-origin MP Rishi Sunak has become stronger in the race for the new PM. Bookies in the country also believe that Sunak can become the next PM. read full news

Indian-origin Rishi Sunak may become the next Prime Minister of Britain. Sunak has a deep connection with India. He is married to Akshata, daughter of Infosys co-founder Narayan Murthy. Sunak, who arrived in the British Parliament for the first time in 2015, strongly supported Brexit and made a place in the Tory party. He supported Boris Johnson’s strategy of leaving Britain out of the European Union. read full news

Rishi Sunak said – China is a big threat to the world, number one contender for British PM

Rishi Sunak of Indian origin, who is considered to be at the fore in the race for the post of Prime Minister in Britain, has shown a tough stand on China. Sunak said- It has become absolutely clear that China is the biggest threat to our country and the world. If I become the Prime Minister, strict steps will be taken against China from day one. read full news